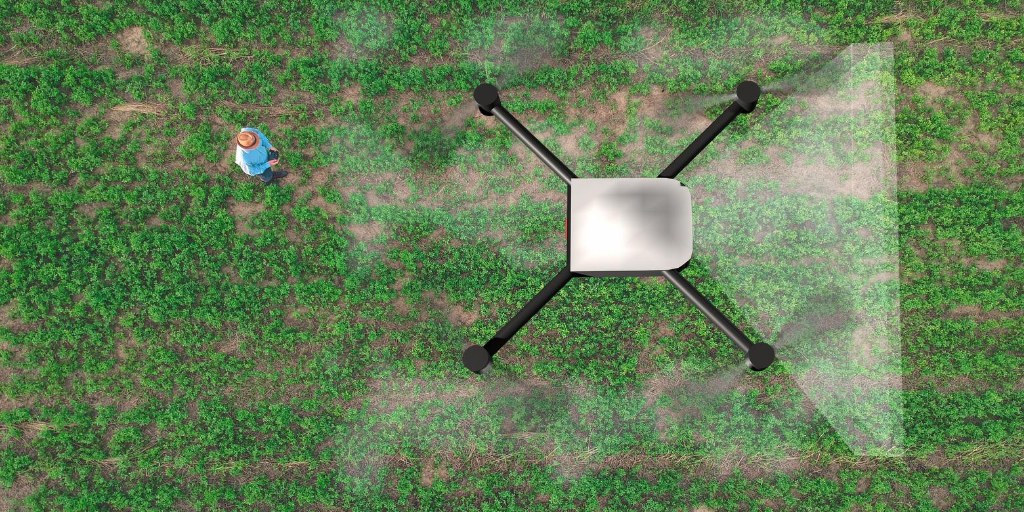 CROP SPRAYING WITH DRONES – How a national initiative has become a success story with international scaling possibilities.

By Larissa HaasAugust 18, 2020No Comments

From apricot plantations in Valais to vineyards in Vaud, there are many farms in Switzerland with steep land plots that present challenges for their cultivation. For more than sixty years, helicopters have been used to farm and treat these hard-to-reach plots of land. However, new technologies have emerged and helped generate new ideas, and with these new opportunities have been raised. “Smart farming” is key for many agricultural businesses operating in this context and is a term that describes how the agricultural sector is being disrupted by new technologies that improve processes and help farmers overcome challenges, like the steep land plots in Switzerland. In other words, smart farming makes farmers more efficient by optimizing processes while minimizing the impact on the environment.

So let’s turn first to the state of the art: What is the current situation with crop spraying in Switzerland? Currently, there are 18 companies who have the authorization to spray crops with drones. What a stunning number! As a comparison, in terms of helicopter flights, there is only one single firm authorized to conduct such operations, and this has been the case for many decades. In contrast, drone technologies enable promising new business models to emerge in the agricultural field, as Nathanael Apter points out. Apter is an engineer working on new technologies in FOCA’s Innovation and Digitalization (ID) unit and is responsible for the authorization processes of drone operations. Apter is proud to say that there are constantly more and more companies interested in spraying crops with a drone: “In the past month alone, I’ve received 10 new requests”, he says and highlights: “That’s really a lot!”.

The reason for this boom becomes crystal-clear when looking at the technology’s advantages: First and foremost, it has a low ecological footprint. ID’s co-leader Markus Farner says: “Flying 1.5 metres above the crops, drones spray plant protection products with stunning precision. Here lies the core difference with helicopters”. In other words, drones’ spraying systems are highly accurate, which allows farmers not only to use fewer plant protection products, but also to avoid spray drifting on roads, waterways or other areas: smart farming at its best!

Against this background, the crop spraying initiative holds great potential for supporting the United Nation’s Sustainable Development Goals (SDGs) in terms of the protection of natural ecosystems, the promotion of sustainable management of agricultural land, and the boosting of environmental friendly production patterns. Indeed, all these points turn out to be even more evident when we consider the fact that drones are much easier to handle and less expensive than their counterparts with propellers.

The drone spraying initiative is a great opportunity both for the people working in the agricultural sector but also for the environment.

The beginning of a success story

It was back in May 2016 when the first formal request for “spraying crops with a drone” landed on a desk at FOCA’. Initially, this document raised many questions and sparked a lot of expert discussion, as Markus Farner explains: “Neither FOCA nor the other Federal Offices knew how to deal with drones in this context”. But thanks to Farner’s belief in the benefits of this innovation, paired with the enthusiasm of his teammates, a new regulatory framework for crop spraying with drones was developed.

Switzerland soon became a pioneer for the way it approached the authorization of such operations. First, the model of the specific operation risk assessment (SORA) was applied, and then only a few months later a more efficient and stringent procedure was established enabling the widespread use of drones throughout the country. With this new standardized approach that was introduced at the beginning of 2019, the minimum safety distance for drones became smaller than that required for helicopters, which resulted in more straightforward procedures and the need for fewer expert checks.

At the beginning, the processing time for such operations used to take at least six months. Today, it is done in a maximum of two weeks.

Internationalization of the national initiative

The simplified authorization process raised Switzerland not only to the forefront of innovation, but the carefully designed framework, which is unique in the European context, also gained international recognition. Apter explains: “The way Switzerland chose to authorize crop spraying operations is unique – worldwide!”. Francine Zimmermann, co-leader of ID and head of policy and regulation, adds: “Switzerland’s expertise and know-how are outstanding in this field. We have the potential of being the leading force on a global level”. However, there are now some other European countries, such as France and Austria, who have implemented similar initiatives, but their processes are not as ripe as they are in Switzerland. As a consequence, Zimmermann highlights how the Swiss approach stands out internationally and she sees knowledge sharing become a pressing issue in the future.

Setting the stage for U-Space

Switzerland’s initiative in crop spraying is a proof of concept that tells us a lot about how the Swiss context provides fertile soil for informing regulatory processes through empirical evidence and new business cases. It shows us how small companies can be encouraged to open up new and innovative industry branches, because the accurate spraying system that has been developed in this context is by no means only restricted to the application of plant protection. Indeed, today there are companies that are specialized in applying white paint on the ceiling of greenhouses or distributing wasps on maize crops as an innovative and sustainable way of pest control.

Hand in hand with such economic developments is further technical progress, as Nathanel Apter highlights: “There are companies who have an interest in flying their drone beyond the visual line of sight”. It is exactly such visions that are the drivers pushing the U-Space forward and prompting implementing its promising initiatives and services. For example, only a quick glance at the sky above Switzerland’s steep land plots shows us that a spraying drone hardly ever operates alone: They frequently operate nearby other unmanned vehicles or even helicopters. Such real existing situations highlight the importance of tools that can facilitate the coordination and surveillance of different aerial vehicles or the need for deconfliction services as a pressing issue.

Switzerland’s crop spraying initiative is an impressive piece of innovation that is giving the industry the unique opportunity of making history.

This website is managed by the Innovation and Digitalization (ID) unit of the Federal Office of Civil Aviation in charge of fostering innovation in the aviation field in Switzerland. “susi.swiss” aims to inform about the Swiss drone ecosystem by writing publications and organizing events with the aim to present the progress of the implementation of U-Space in Switzerland, its services and technologies.